Adam Tsai and I attended Chain React 2017, the first-ever React Native conference. The event took place in Portland, Oregon July 10 and 11. Kudos to the team at Infinite Red for putting on such a well-organized event with such high-caliber speakers (and fantastic food).

I thought the first-ever React Native conference would be smaller in scale. But I was wrong. It was bigger - in a lot of different ways: more attendees (over 200), a wider variety of topics, and a diverse community and speaker decks from all corners of the world. (Although more women attendees would have been great to see.)

I wasn’t sure what to expect when attending a React Native specific conference. While Adam and I have built things with React (and Angular, Vue.js, etc.), our React Native experience is confined to test apps and experimentation. Luckily for us, there was a lot of crossover in topics between React Native, React, and recent trends. We came to the conference as much to learn as to take the temperature of the community and momentum of the framework. 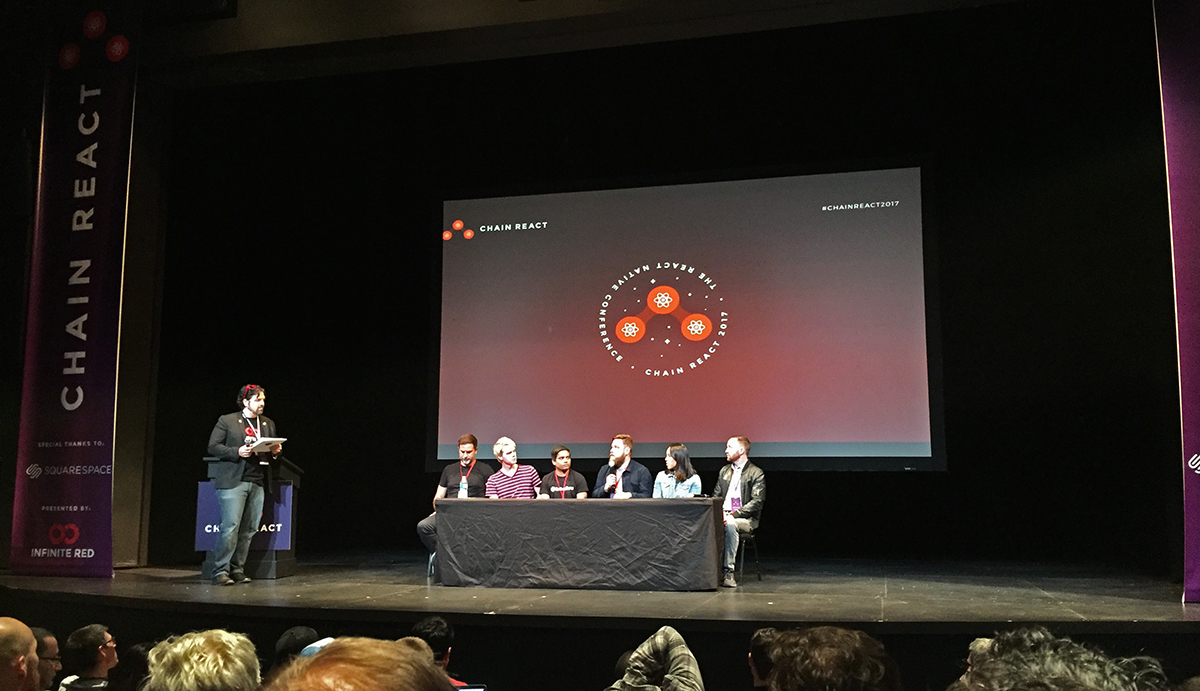 We didn’t get answers to all of our questions, but in this quickly evolving Javascript ecosystem, there are no definitive answers. Things are more nuanced than that. It is clear that React Native has momentum. Some of the speakers were from big-name companies. PayPal is investing in React Native to power their native app purchase process. Microsoft is investing in tooling Mobile Center and Code Push. And it’s not just big companies. Tons of React Native training and courses have popped up. Startups are rewriting their hybrid apps in React Native. Which is not to say it’s a perfect solution. There are things to overcome.

Javier Cuevas at Gudog shared his experience with rewriting a large hybrid app (Ionic) with React Native. They built the initial app with Ionic in about 6 weeks. They’ve been working on the React Native app for a couple months and haven’t gotten it in front of users yet. Since it’s an ongoing process, it’s a bit of a cliffhanger, fitting for the state of the Javascript world. Javier outlined the extensive list of decisions that need to be made when building a React Native app: from base-level decisions about folder structure to navigation options to typechecking languages. It sums up the wild west that continues to be the Javascript landscape.

If you are building a prototype, Ionic may be the faster choice because it streamlines some of these decisions, but the flip side is less flexibility and performance issues. A hybrid app will never feel like a native app, and recreating the native environment and UI results in a sluggish user experience.

React Native might be the more comprehensive, longer-term solution because you can make all these specific choices to fit your needs. This really is just a theory. We’ve made more than one prototype that ended up getting used as the end product. And maybe that is just fine, until it isn’t. Don’t over build.

While there are many questions still in need of answers, the React Native Conference offered plenty of concrete information and higher-level inspiration. It’s up to all of us to lend a shoulder (or even just a finger) to keep the React Native momentum going. Brent Vatne reminded us of the importance and ease of contributing to open-source projects, just submitting a simple documentation fix or integrating your blog post into the official documentation. Keep pushing.

Whatever the hurdles React Native needs to overcome, the “Write Once, Run Anywhere” mantra resonates (however pie-in-the-sky). Leveraging our React knowledge to build apps that work on IOS and Android makes a lot of sense. And lots of other companies and developers think the same thing.

Here is a collection of links to conference materials. Videos are coming soon.

Posted in #Technologies under *Conference