Time spent with the heroes and nerds of Laravel

Like a doctor donning a white lab coat or a stockbroker in a 3-piece suit, seeing a guy moseying around in a bear coat at a professional conference let me know that I was among my coder brethren and sister-ren.

Laracon 2017 was hosted close to Times Square in New York, NY at New World Stages. Attendees came from across the globe to connect with fellows and hoping to get a bleeding edge peek to where the framework and its community are heading.

Taylor Otwell delivered there. In his talk, he uncovered some exciting new features being integrated into Laravel 5.5 which you wouldn’t be privy to unless you watch the GitHub repo (or followed some[one|thing] that does, like Twenty Percent Time). Taylor also revealed Laravel Horizon, which will make monitoring jobs a breeze in 5.5. 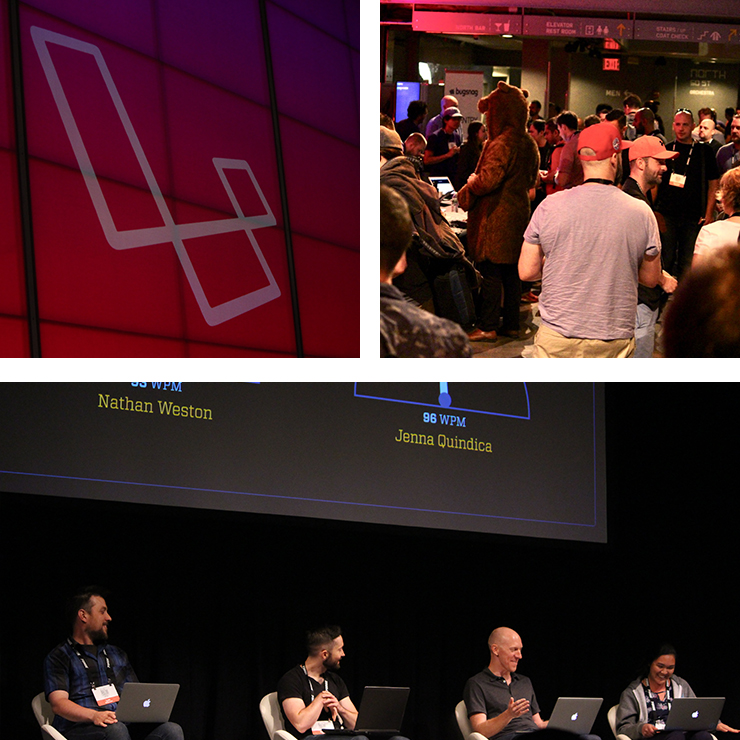 Of the rest of the talks, a few re-enforced best practices, others were meant to give exposure to the platforms integrated into Laravel — i.e, Vue.js, Webpack, and Composer — and several were general topics relevant to backend developers.

The handful of us from Foster Made that attended agreed that, aside from Taylor’s update, a lot of the content felt like a “refresh” or “reboot” for us. Which can still prove to be helpful, because even if I think “of course” when I hear a logical explanation of how to do something, I might not always employ that practice while working. Taking a step back to revisit the basics from time to time can be a good thing.

The biggest perk of attending really was being around other Laravel developers and seeing the celebrities of our community. Waiting outside for one of the talks to end, Nils Adermann, co-creator of Composer, sat alone next to me. I’m pretty opposed to treating these people like gods, but, like 12 year old me unable to work up the nerve to ask the pretty girl to dance at the school social, I just couldn’t make myself talk to him.

Other than that, it was nice to see so many attendees donning Star Wars and cat shirts; Tighten holding the friendly competitions of who could type the fastest and which was better: Red Vines or Twizzlers; audience members attempting to peer review a speaker’s work while he’s presenting; and everyone just being generally a friendly bunch. Things you’d expect to see developers doing. Taylor and his team threw a great conference at a great venue and made sure everyone had a wonderful time.

Posted in #Technologies under *Conference, *Laravel